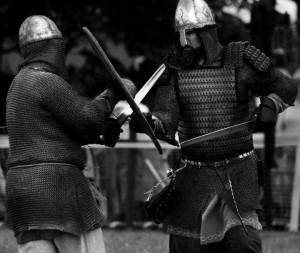 Combat displays are one of the key elements at most of our events, and we are proud to show the skill and fighting prowess of all our members. We can provide a demonstration of the Viking “Shield Wall” – a central battle tactic, and an exhibition of the arms and armour of the age and their uses on the battlefield. Pitched battles between fighters are also commonplace at our events, as well as tournaments and single combat. 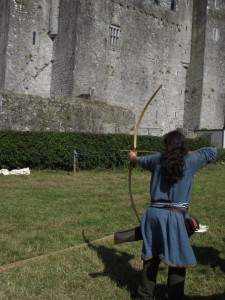 The Viking people highly respected the bow as a weapon, though it was usually a side or additional weapon. The Vikings were so respectful of archery that they were even known to hang golden bows above their babies’ cradles in the hope that their sons would become good archers.

In our living history village you may get to see the various different types of bow used in Viking times from the common longbow, to the horse bow which was more popular in Eastern Europe or perhaps even the wooden limb crossbow the first ever kind of this bow ever seen. You will also be told about the different types of wood used in the making of bows or arrows including Yew, Ash, Poplar and Beech.

In Viking times, they did not have dedicated Fletchers (or men who made arrows), each archer was responsible for making his own arrows. Our Viking Archer will be able to demonstrate not only the bows mentioned above but also the most commonly used arrow shapes and their key features.

In our living history village, you can see a real Viking bow and arrows, and maybe even get to try a hand at archery yourself!

According to custom, all free Norse men known as Vikings were required to own weapons, as well as permitted to carry them at all times. In every village there was a man or men who specialised in caring for and repairing weapons. These skilled craftsmen were known Armourers.

In the living history village watch our Armourer demonstrate the tools used to care for and repair armour and weapons. You may see the deburring of swords and other weapons and the polishing of plate armour and laminar using polishing tools or a grindstone. At our Viking armoury you will also be able to see and hold see many different types and styles of Viking weapons and armour. You may even try on an authentically made Viking helmet or mail and have your picture taken as a Viking!

Maille (often mistakenly called chainmail) was worn only by the very rich, as extra protection in battle. A suit of maille was very expensive, and a laborious and time consuming thing to make. Our mailler can demonstrate the repair or chaining of maille using specially-designed pliers as well as the slow process of making an entire shirt of maille. In our living history village you will usually find our mailer at or near the armoury. 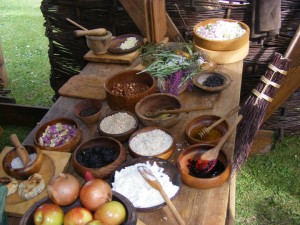 At most of our events, one of our biggest displays is the Viking kitchen. In the kitchen you will see a large display of the foods which were most popular in Viking times such as cereals, dairy, vegetables, bread, meat and fish. You will also see authentic Viking cookery equipment and eating utensils. At our events, our authentically dressed Viking women will usually prepare traditional Viking meals for the society members; typically you may see the preparation of stews, soups, flatbread and boiled or roasted meat. The ladies at this display can also describe the typical Viking diet and eating habits as well as detailing the everyday life of a woman in Viking times.

In the kitchen you will often also find other women’s crafts on display such as weaving, spinning and sewing. You may also see some authentic Viking games on show. 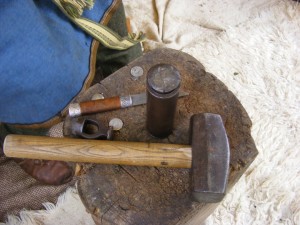 In Viking society the monier was responsible for making money or coins. The Vikings introduced the concept of the manufacture of coinage into Ireland around the year 1000. These ‘die-struck’ coins were based were based on the Anglo-Saxon pennies which had been pouring into Scandinavia as a result of tribute payments to the Vikings.

In our living history village, you will see the monier’s tools including his hammer, dies and scales. You can also see the coin-making process in detail, from hammering out the blank silver discs to striking the coin using authentic dies which stamp the coin with a replica design of the first ever coin minted in Ireland. The coins can be given to children to take home, so they remember their visit to the Viking camp. 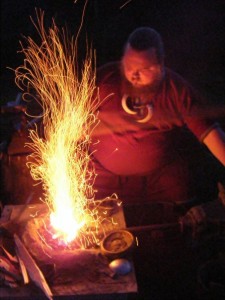 Viking Blacksmith The blacksmith was an important figure in the Viking town. Not only did they make and repair weapons of war, but they also made nails and washers for ships as well as tools for virtually every other craftsman, farmers and fisherman. Among the items made by the blacksmith were weapons, knives, chains, padlocks and keys, as well and staples, clasps and hinges for boxes and doors. In our Viking village you can see our blacksmiths hard at work repairing and shaping metal items by the fire with tools such a hammer and tongs as well as an authentic anvil and bellows to stoke the fire. 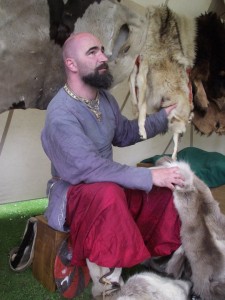 Trader Furs were a lucrative trade across the viking world, as they made for very warm clothing. Our fur trader’s stall has pelts from seals, boars, wolves, foxes, bears, deer, arctic foxes and rabbits. There are also some examples of how furs would have been worn on clothes, from rabbit fur-trimmed hats to sealskin boots.

Dice and board games were very popular in Viking times. The best known Viking game is ‘Hnefatafl’ or ‘Kings Table’ (pictured) but in later periods they would have played games more familiar to us such as draughts, chess or backgammon. In the Viking kitchen you will often find some of our members playing traditional Viking games and they will be happy to explain the rules and play a game with you.

Personal ornaments, brooches and smaller metal objects were usually produced by a specialist smiths who worked with a particular metal for example a silversmith worked with silver or a goldsmith with gold. At any of our events you can expect to see our silversmith making intricate hand-made silver bracelets from silver wire using a specialist braiding technique. Come and see our silversmith and you will see not only the tools and techniques employed in shaping and molding Viking jewelery but also hear about silver trading and its place in the Viking world. 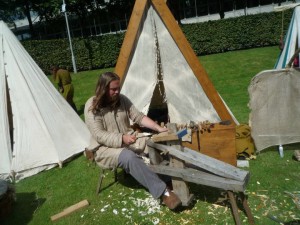 Throughout the ages woodworking has always been an essential craft and the woodworker was a vital part of the Viking community. Woodworking skills were applied in all areas from building houses to creating furniture and repairing damaged items such as weapons and tools.

In the living history village watch our woodworker demonstrate the use of traditional tools to create small items for everyday use. Typically demonstrated is the operation of the draw horse used for holding wood while it is carved or shaped and the pole lathe used to turn wood creating items such as bowls, cups and legs for chairs. You may also see logs being split with an axe and hammer for fire-wood or smaller wooden items or split with wedges to create plained timber for use on larger projects such as houses, ships etc.

You can also watch our woodworker demonstrate some of the more intricate tools used for carving, plaining and decorating wooden items such as the drawknife, bow-shave and chisels.