Combat displays are one of the key elements at most of our events, and we are proud to show the skill and fighting prowess of all our members. We can provide a demonstration of the arms and armour of the age and their uses on the battlefield. Pitched battles between fighters are also commonplace at our events, as well as tournaments and single combat.

During the medieval period, the Archer and his role in combat went through many changes. The weapon itself became more powerful than ever before with an average longbow having a 140 pound draw (picture lifting 10 stone with 2 fingers). These more powerful bows could pierce maille and sometimes plate armour.

However during the medieval period the crossbow became more popular as it took little training while the longbow had to be learned from the age of 6 onwards. These crossbows became even more powerful, drawing up to 900 pounds and thus needed machines to span them.

During our larger combat displays you may see the use of bows and will often see arrows flying overhead. 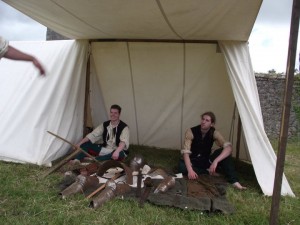 In every castle and village there was a man or men who specialised in caring for and repairing weapons. These skilled craftsmen were known Armourers.

In the living history village watch our Armourer demonstrate the tools used to care for and repair armour and weapons. You may see the deburring of swords and other weapons and the polishing of plate armour and laminar using polishing tools or a grindstone.

At our medieval armoury you will also be able to see and hold see many different types and styles of weapons and armour including cross-bows, plate armour swords and maille. You may even try on an authentically made medieval helmet or mail and have your picture taken as a medieval knight!

During the Medieval period, Maille (often mistakenly called chainmail) was worn only by the very rich, as extra protection in battle. A suit of maille was very expensive, and a laborious and time consuming thing to make. Our mailler can demonstrate the repair or chaining of maille using specially-designed pliers as well as the slow process of making an entire shirt of maille. In our living history village you will usually find our mailer at or near the armoury.

At most of our events, one of our biggest displays is the medieval kitchen. In the kitchen you will see a large display of the foods which were most popular in medieval times such as cheese and dairy, vegetables and herbs, fruit and nuts, breads, meat and fish. You will also see authentic medieval cookery equipment and eating utensils. At our events, our authentically dressed medieval women will usually prepare traditional meals for the society members; typically you may see the preparation of stews, bread, tarts and boiled or roasted meat. The ladies at this display can also describe the typical medieval diet and eating habits as well as detailing the everyday life of a woman in medieval times.

In the kitchen you will often also find other women’s crafts on display such as weaving, spinning and sewing. 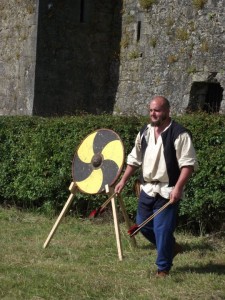 In medieval times, the role of the archer became more formal, respected and well paid. Thus the role of a Fletcher (or person devoted to the making of arrows) became hugely important, so much so that dedicated arrow-making workshops were set up all over England and laws were put in place to uphold high standards in the making of arrows. 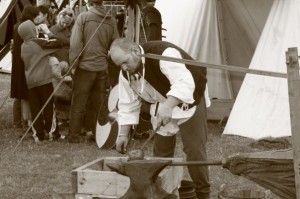 The Medieval blacksmith was an important member of the community. The life of a Medieval Blacksmith would vary according to their location with a village blacksmith living in a small rural community making various tools, household objects and weapons whereas a castle blacksmith lived in the protection of the medieval castle and was required to make and maintain the weapons and armour of lords, knights and men-at-arms. Medieval blacksmiths were also an important part of a fighting army, making new weapons keeping up a supply of arrowheads and repairing and the maintenance of old weapons and armour.

In our medieval village you can visit the forge and see the various tools and equipment used by the blacksmith such as the anvil, tongs and various hammers. You will also see our blacksmiths hard at work mending and shaping weapons, tools and other household objects. 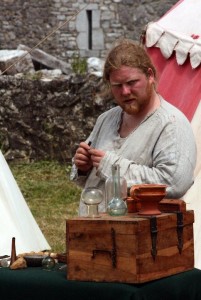 In Medieval times the Surgeon Barber was for most, the main source of primary medical care (and close shaves). In our living history village you will see our Surgeon Barber’s exhibition of herbal balms and constitutional remedies and hear how these were used for healing minor wounds and enhancing physical health. You will also see him demonstrate the tools of his trade used for cleaning or removing teeth, for lancing boils and infected tissues and for performing surgery. Come visit our Surgeon Barber and you will see what life was like before the advent of modern medical care!

Scrimshaw is the art of fashioning objects from horn and bone. A maker of scrimshaw is known as a ‘Scrimshander’. At the scrimshaw display our Scrimshander will demonstrate the use of tools such as small chisels, knives and saws used for carving and gouging antler and bone. On display will be small items made of antler, like needle cases and knife handles, and jewellery.

Throughout the ages woodworking has always been an essential craft and the woodworker was a vital part of the medieval community. Woodworking skills have always been applied in all areas from building houses to creating furniture and repairing damaged items such as weapons and tools.

In the living history village watch our woodworker demonstrate the use of traditional tools to create small items for everyday use. Typically demonstrated is the operation of the draw horse used for holding wood while it is carved or shaped and the pole lathe used to turn wood creating items such as bowls, cups and legs for chairs. You may also see logs being split with an axe and hammer for fire-wood or smaller wooden items or split with wedges to create plained timber for use on larger projects such as houses, ships etc.

You can also watch our woodworker demonstrate some of the more intricate tools used for carving, plaining and decorating wooden items such as the drawknife, bow-shave and chisels.